Grace Baptist Church was organized in 1981 by Pastor Eddie Milligan with the sponsorship of Victory Baptist Church.  Services were held in various places until the purchase of the current property in June of 1981.  A building was moved in, and the first service was held on Father's Day.  Homecomings are held on the fourth Sunday of June to allow members to avoid conflict with Father's Day.  Membership at this time was approximately 20.

In March 1992, thieves broke into this building, stealing the PA system and various other items, and burned the building beyond repair.  With the help of insurance and donations, a new building was erected.  The new building was constructed by Arcon Building Services at a much lower cost due to the generosity of the owner, Dennis Sessums, the nephew of Bro. Milligan.  On May 5, the plans were drawn up and the building was ready for services by late July.

As membership began to increase, a larger auditorium was needed.  Members began contributing to a building fund and money for a foundation was raised.  The foundation was poured in the early 2000s, and in 2007 construction was began on the new building.  The building was completed in June and, ironically, the first Sunday service was held on Father's Day in June 2007.

Today, the Church continues to grow under the direction of the same pastor that started it many years earlier.  We hope that you will come be a part and help us to grow in the future. 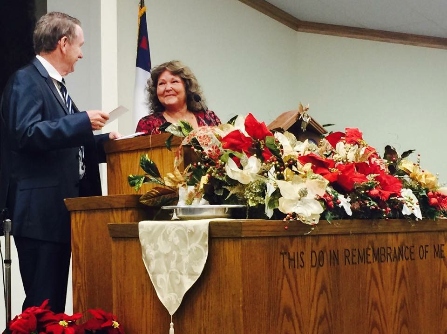